Kate Upton, who dons bikini bottoms and a puffy white jacket on the cover of Sports Illustrated annual swimsuit issue, admitted before the cover’s reveal that the Antarctica-based shoot nearly killed her. "I don’t think you can go to Antarctica and stand in a bikini without that happening," she said. "But I didn’t die, and I’m OK now." Well, thank goodness, because who else could possible smash their boobs together on the cover of a magazine? Upton has taken the practice to a new level. Of course, the editors at Sports Illustrated see nothing wrong with the fact that their editorial vision nearly killed a half-naked woman.

Amanda Hess of Slate writes about getting a comment from the magazine:

I called Sports Illustrated to ask what the magazine was thinking putting Upton in that situation, and what it thinks of the decision now. Knowing Upton’s symptoms, which are consistent with hypothermia, does SI feel that Antarctica is an appropriate place to stage swimsuit shoot? “It’s on the cover,” was the magazine spokesman’s response. Later, in an emailed statement, he volleyed the responsibility back to Upton. "From the very beginning, the Sports Illustrated swimsuit franchise has put the models first,” he wrote. “We foster a very collaborative environment working closely with the models throughout the planning and execution of our shoots. This was again the case for the Antarctica production which we worked on with Kate for several months before embarking on the trip and during the six-day shoot." (Upton, for the record: “I was very surprised by the news that that’s where my shoot was going to be located.”)

As a reminder, here’s Upton going into details of how she suffered during the shoot:

“I’m naked and trying to change,” she told David Letterman of her weeklong experience in subzero temperatures. “I literally couldn’t move my legs, so the editors would have to pick up my legs and put them into my next outfit.” The effects continued when Upton returned to American soil. “When I came back, I was losing my hearing and eyesight,” she said with a smile on the Today show. “My body was shutting down because it was working so hard to keep me warm."

I mean, is worker’s compensation even an option here? I get that models are basically freelance workers, but I can tell you I’d never risk hypothermia for a gig, even if it got me on a giant billboard in New York City.

It’s early, the work week is just beginning and everyone’s got a bit of a Monday grump going on more than usual. It might be the weather, or it might have something to do with the appearance of Tardar Sauce [sic], the notorious Internet-famous "Grumpy Cat" of the blog of the same name, on The Today Show over the weekend. Take note, other people with weird-looking pets looking to exploit their Internet popularity. You can get on a pretty major daytime television program!

The notoriously sour-faced feline appeared with her "pet parents" (at The Today Show, they don’t like to use the word "owner") Tabby (no, really), Bryan and Crystal Bundesen, who explained the cat’s sudden rise to fame and its mostly having to do with Reddit because of course. As for the appeal of her expression? "We think it’s because she looks so grumpy that you can’t help but be happy when you look at her," Bryan Bundesen told The Today Show. "She’s like a stress reliever."

Bundesen assured the crowd that Grumpy Cat is actually quite docile and playful despite the less-flattering brand to which she is attached. The Bundesens also hawked some Grumpy Cat merchandise (with some proceeds going to animal rescue charities), including Christmas cards, mugs and t-shirts in case you’re still looking for something for the slightly-unhinged cat lover or full-time Redditor in your life.

Not to be outdone by his wildly popular Internet-famous cat counterpart, Lil Bub will grant an exclusive, tell-all interview to Katie Couric to air later this week. Watch Tardar Sauce’s appearance below.

Visit NBCNews.com for breaking news, world news, and news about the economy

Kirk Cameron, who probably believes that one time men rode around on dinosaurs hunting unicorn meat while women waited patiently at home to cook pot roasts and feed their ten children, stopped by The Today Show this morning to plug his new movie, which is some sort of documentary about how America is the best because of the pilgrims and God and gay people are terrible and all babies should be born forever and ever, amen. And, of course, Hoda Kotb, amid her and Kathie Lee Gifford’s (likely drunken) fawning over the ’80s heartthrob-turned-crazy evangelist, was like, "Heya, Kirk, how do ya feel about that Todd Akin, huh?" Because of course.

Not surprisingly, Cameron defends Todd Akin, who we all know is a fucking moron for suggesting that "legitimate rape" does not result in pregnancy (because of the rape-blocking walls of the woman’s "area," which is what Todd Akin, and probably Kirk Cameron, call a "vagina"). "He loves his wife and has six kids," Cameron attests. "He misspoke and apologized!" And good for stellar lady journalists Kotb and Gifford for just letting that slide. Oof, 10AM is way too early for a political argument, right?

Visit NBCNews.com for breaking news, world news, and news about the economy

This morning came sad news from The Today Show couch (well, depending on who you’re rooting for, I guess) as Ann Curry announced that she will no longer be a regular co-host of the morning show and will instead transition into a new role. Shut off your C-SPAN Obamacare coverage for a few moments, folks: this is the real news.

According to a statement released by NBC:

As TODAY Anchor at Large and National and International Correspondent for NBC News, Curry will lead a new team covering stories spanning the globe. She’ll anchor prime-time specials and report for TODAY, Nightly News, Rock Center, Dateline and MSNBC, and will have a major presence across all digital properties.

Watch Curry’s announcement in the video below:

What am I going to miss most? Ann Curry’s bat-shit crazy Halloween costumes, obviously: 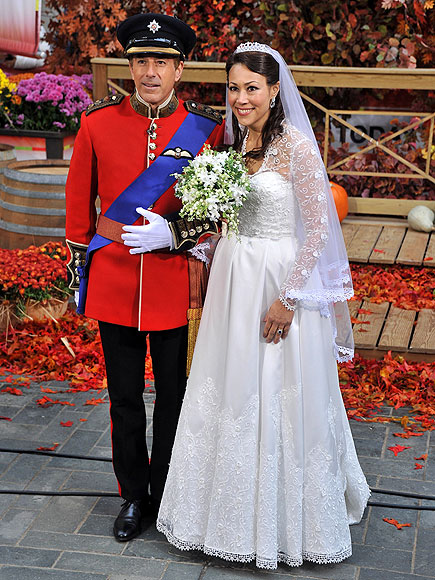