You know, I think I have consistently underestimated Andrew W.K. I remember watching him perform “Party Hard” on Saturday Night Live, if such a thing is even possible to envision in this day and age, and thinking that for once, the music segment of that show wasn’t a train wreck. Then, years later, I saw him DJing at Santos Party House, and the place was fairly empty, but he still killed. So I have every expectation he will succeed in his effort to drum for 24 hours straight, which is entering the final act right about now.

The stunt is part of a Viacom’s O Music Awards, and W.K. has been training hard for it. He’s also, unbelievably, not using caffeine or other stimulants, which explains why he’s looking a little haggard at the moment. Only eight more hours to go, buddy! Luckily, he’s got some drummer friends—everyone from Marky Ramone to, uh, Zac Hanson—to keep the rhythm in his sloppier moments. Right now it’s a guy in a Siouxsie and the Banshees tank top and fedora. Not a good look.
But surely this can’t be for a Guinness-official world record, right? If it were, there would be some official Guinness guy standing over W.K., close enough to breathe down his sweaty neck, making sure he didn’t drop a single beat, or sneak off to the bathroom. And he certainly wouldn’t be allowed collaborators to streamline the whole thing. We’ll consider this a warm-up, dude, but someday we expect a 24-hour drum solo. Then make an album of that so I can drive my neighbors insane.

What a lot of people forget about Saturday Night Live is that longtime player and Portlandia star Fred Armisen didn’t start off as a comedian. He spent a good chunk of the ’90s playing in a Chicago post-hardcore punk band called Trenchmouth. So it comes as no surprise at all that when the show decided to do a fake rock-doc sketch about the one British punk musician who liked the late Margaret Thatcher, Armisen assumed the role. And the fake band—Ian Rubbish and the Bizzaros—actually did get the ’77 British punk sound down. The first few seconds of "Hey Policeman" sound like they could have come from any number of classic acts from the era.

Of course, the Bizzaros did deviate in that Armisen’s Johnny Rotten-lampooning Ian Rubbish was quite fond of the Iron Lady, even penning songs like "Maggie Thatcher," where they sing lyrics like "there’s a lady in 10 Downing / Check it out, she’s quite astounding" over a "Janie Jones"-esque beat. And who could forget that touching, Falklands conflict-referencing ditty, "Sweet Iron Lady?" Now, you or the non-Thatcher-hating special someone in your life can own these classics from these fake ’70s punk band absolutely free, thanks to the fact that said fake band recorded and released an EP of songs performed in the skit. You can download it here, at said fake band’s real website, and watch the original sketch below.

The death of late-night talk-show television has been so slow, so painful, so very unfunny. Honestly it’s flabbergasting that David Letterman didn’t successfully sarcastify the genre into its grave twenty years ago—though god knows he has tried. But are we closer now to the sweet embrace of the pop-cultural crypt?

Jimmy Fallon inking a deal to definitely, probably, eventually replace Jay Leno in NBC’s 11:35 PM slot, with Seth Meyers seen as the front-runner for Fallon’s current job, is a move in the right direction: just dump old “Weekend Update” anchors behind some fancier desks and have them participate in a terrible Harlem Shake type meme every now and then. Voilà! Instant non-entertainment.

Honestly I just feel bad for whoever ends up on this career track, it seems like a waking hell, and for what? So bloggers like me can make fun of you without ever bothering to watch your monologue? I think every comedian alive must have missed the point of The Larry Sanders Show. Get a new format, funnymen (and funnywomen, if and when you’re allowed a say in the matter).

Steve Martin, Dan Ackroyd, Martin Short, Tom Hanks, Alec Baldwin, and Candice Bergen all appeared in a skit inducting JT into the five-timers club, the exclusive old (mostly-)boys’ club for prolific hosts.  Its one of those rare skits that brings on a bunch of guests and is actually funny.

But it wasn’t ": later in the show recently departed SNL cast member Andy Samberg came back to appear in a Dating Game skit with JT for a little Dick In A Box-style skeeziness.

If there’s any episode of Saturday Night Live worth watching this season, it’s this one. Loving the red suit with those golden epaulets, Ben Haggerty!

Macklemore and his friends performed Thrift Shop for the first time ever on Late Night With Jimmy Fallon back in December and have performed a couple of times on Ellen.

Watch them on SNL below!

In the some-might-say-blasphemous skit, which is set up like a movie trailer, Waltz plays Jesus H. Christ ("The H is silent) who rises from the dead, comes down off the cross to blow to pieces the men who have betrayed him.

Not surprisingly, already some folks are offended by the skit. Something called Red Alert Politics called DJesus Uncrossed  "insensitive" and said SNL "crossed the line." The conservative site NewsBusters also huffed and puffed.

You can watch DJesus Uncrossed below:

Those squeals that roused you East Coasters from your slumber at 11:30p.m. was everyone who stayed up past her bedtime to watch Justin Bieber host Saturday Night Live. At least the ones who weren’t felled by hypothermia after camping out on 30 Rock during a blizzard.

It being so close to Valentine’s Day — and also, it being Black History Month — Justin went into the audience with red roses searching for the perfect girl: 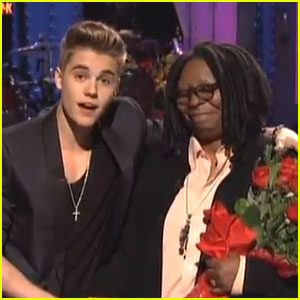 No word on whether the rest of the episode was actually funny. Some of us are old and need our sleep. You can watch the opening clip monologue below. Hey, was that Mike O’Brien from Seven Minutes In Heaven that I peeped there in the audience?

Crazyass Justin Bieber fans camped outside 30 Rock during a fucking blizzard. Inside, their boy wonder vomited during his Saturday Night Live dress rehearsal from food poisoning.

According to Entertainmently Weekly, roughly 45 Beliebers and their "wet sleeping bags" have been camping on Rockefeller Plaza. Some have waited in the cold since Thursday, in tents on the sidewalk new iPhone-syle, waiting for SNL to release standby ticket’s for tonight’s hosting gig. These packs of insane 14-year-olds had better have been wearing some mighty warm Uggs and polar fleeces because tickets weren’t handed out until last night, according to both BuzzFeed and gossip columnist Naughty But Nice Rob.

The New York Post reported that SNL has taken pity on these poor deluded souls’ parents and will be handing out soup to the crowd. (Apparently they always do that in cold months, though.) Yesterday Bieber and his team also ordered Ray’s Pizza for everyone in the standby line. Cue delirously happy fans posing with a pizza box.

Meanwhile, warm and dry inside Studio 8H, Biebs has been rehearsing all week, save an incident on Wednesday when he barfed during a rehearsal from food poisoning. Oh, to be that barf!

Andy Samberg returned to Saturday Night Live last night for a digital short starring Lonely Island, host Adam Levine and musical guest Kendrick Lamar all about YOLO. In case you’ve been under a rock, YOLO is the acronym everyone loves to hate and last night it didn’t mean "you only live once." With these guys, YOLO is a warning: "you oughtta look out."

The clip reminded us what Samberg did best on SNL: absurdist digital shorts. The joke in this one gets old quickly, although Lamar’s brief, serious interlude makes it funny again.

Still, I wouldn’t mind if Samberg comes back with Lonely Island occasionally for digital shorts on SNL: