I didn’t really know who Mindy McCready was until I found out she had killed herself, as I am not well-versed in ’90s pop-country, celebrity sex-tapes, or, really, anyone who has every been associated with Dr. Drew Pinsky. It’s sad that she is dead, but, as always, I find the mourning of a celebrity to be a little unsettling. I also become pretty ill-at-ease whenever a former famous person, in this case Dean Cain of Lois and Clark fame—who was most recently on Stars Earn Stripes, that weird pro-military reality show in which "real celebrities" (such as Todd Palin, so keep those scare-quotes in mind, please) participated in combat training operations—has spoken out about McCready, to whom he was engaged for about a year in the ’90s. Finally. We were on the edge of our seat!

Cain talked to the venerable grocery-store not-tabloid People about his relationship with McCready and, basically, how fucked up she was.

From his Los Angeles home on Monday, one day after McCready fatally shot herself, Cain struggled to remember any joy to their relationship: "I can’t paint too pretty a picture. She would start arguments, start drama. Things weren’t allowed to be good."

Though drugs and alcohol would later send McCready to rehab, Cain said neither was a factor in their relationship—or its demise.

"She was never abusive or addictive with me, but red flags were everywhere," he says. "I saw all the bad signs and told her to get out." At the end, he says he fled his own home for a hotel to escape her. "Everything she did was a manipulation of sorts. She would just get combative."

In the decade and a half that followed, Cain, who fathered a son with a subsequent girlfriend and is single today, severed all ties with McCready.

"When I did speak to her, truth didn’t come out," he says. "She was kind of poisonous and not somebody I was going to have in my life anymore—or anywhere around my son."

So basically the story is this: the former boyfriend of a relatively famous woman who struggled with addiction and mental illness has revealed that she did not exhibit any actual addictive behavior. But, you know, she fought with him. And he did not want his ex-girlfriend near his son. Great story! Very informative, Dean Cain. Thank you for bravely taking People‘s call. I’m sure it took as much guts as, say, wearing a Superman costume or playing Scott Peterson in a Lifetime movie.

I know that last week’s big election might have been what most people assumed to be the major news event of November. Ha ha, joke’s on you! Today People has announced its annual Sexiest Man Alive issue, and Channing Tatum—former stripper, star of tear-jerkers and action films, owner of that thick neck—graces the cover.

I will say, he may not compete against last year’s honoree, Bradley Cooper (that hair! those eyes!), but I will admit that I’m glad that, once again, Ryan Gosling, who I still think looks like a Pixar character, did not get the cover of the supermarket mag. I hope there will be protests today.

Check out the cover below. (OMG, BTW: Can you believe that Justin and Selena are totes over???) 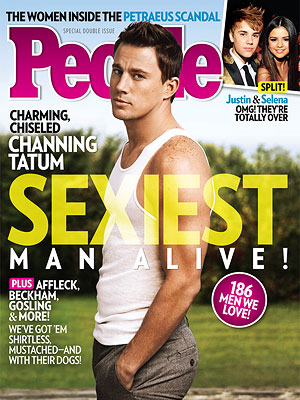