With Mother’s Day just around the corner, we’re all feeling grateful for our beloved moms. But just in case you weren’t, we decided to round up 10 of Hollywood’s most horrible mothers to make you extra happy about yours. Afterwards, we think you might want to reconsider being stingy on your gift this year.

Who can forget Hollywood’s most iconic bad mom? Starring Faye Dunaway as Joan Crawford, Mommie Dearest is supposedly the real life depiction of growing up with Joan. All I know is, never use wire hangers — or else.

Oh, mother. Norman Bates’ mom in Alfred Hitchcock’s 1960 thriller, Psycho, kind of gets an unfair rap. Sure, the lady raised a serial killer with a serious Oedipus complex, but she’s not the real murderer in the film. Spoiler alert: Norman is — he just has a split personality and kills to please “Mother.” In reality, she was his first victim.

Margaret White is the hyper-religious, seriously abusive and totally disturbed mother in Carrie. Not only does she eventually try to kill her daughter, but she also kept her locked in a tiny closet for most of her life. But don’t worry kiddos, ol’ Maggie gets hers in the end, when Carrie telekinetically kills her.

Kate McCallister from the Home Alone franchise left for vacation and forgot her son not once, but twice. Luckily, Kevin was practically an evil mastermind, and really good at forging weapons from household items.

Mrs. Vorhees in Friday the 13th

Mrs. Vorhees from the Friday the 13th movies could actually be considered a good mom, depending how you look at it. Yeah, she’s a mass murderer, but only because she wants vengeance for her son Jason.

Other Mother in Coraline

Talk about the grass being greener. When Coraline get sick of her mother’s incessant nagging and busy schedule, she ends up finding comfort in an alternate universe version of her mom called her “Other Mother.” Of course, Other Mother is actually a monster who lures kids to her world by being a perfect mom. Then she steals their souls.

Gladys Leeman will do anything for her daughter Becky in the 1999 dramedy Drop Dead Gorgeous — even kill her fellow beauty pageant contestants. But aside from being a ruthless killer, I imagine she was also a really awful stage mom.

Poor Matilda. She’s stuck with The Trunchbull at school and at home, she’s got Zinnia Wormwood for a mother. The self-centered (and generally shady) mom doesn’t let Matilda do anything. Her one redeeming moment is when she gives the kid up for adoption. But that’s only because her and her husband were trying to evade the FBI by moving to Guam, and didn’t really want to take her.

Like Mrs. Voorhees, Mrs. Loomis could also be seen as a good mother. Well, not really. But no one can say she wasn’t dedicated. Yes, she did leave Billy while he was in high school, but eventually returned to seek revenge on Sid after his death. “Was that a negative, disparaging remark about my Billy?”

Heartbreakers is about a mother-daughter con artist duo who marry old men to inherit their money. So, yeah, probably not the best mom to begin with. But when her daughter Page actually falls in love, Max decides to seduce him. Why? To prove no one loves Page but her. Because yeah, that makes sense.

So, even if you’re not totally crazy about your mom, be happy that she’s not just totally crazy. Or, you know, a serial killer. Happy Mother’s Day!

Matilda, the brand-new Broadway musical imported from the Royal Shakespeare Company in Stratford-upon-Avon (and later on London’s West End) and based on the Roald Dahl classic, has been buzzed about in New York for months, and last night’s opening night brought much praise from critics all over the country. Ben Brantley’s review in the New York Times begins with the word "rejoice," which, you know, is a pretty solid start, and the show has gotten great reviews in pretty much every other publication. (Of course, the show’s PR team knew that would happen.) So, basically, good luck finding tickets at a reasonable price. Now for the good news: maybe you can finally get into Book of Mormon?

Matilda The Musical, based on the novel by British author/childhood demigod Roald Dahl, opened last week in New York City after originating on London’s West End. But would Broadway dare ask us boorish Americans to understand a British accent or turn of phrase? Pish tosh! (That’s British-speak for "Hell naw.") 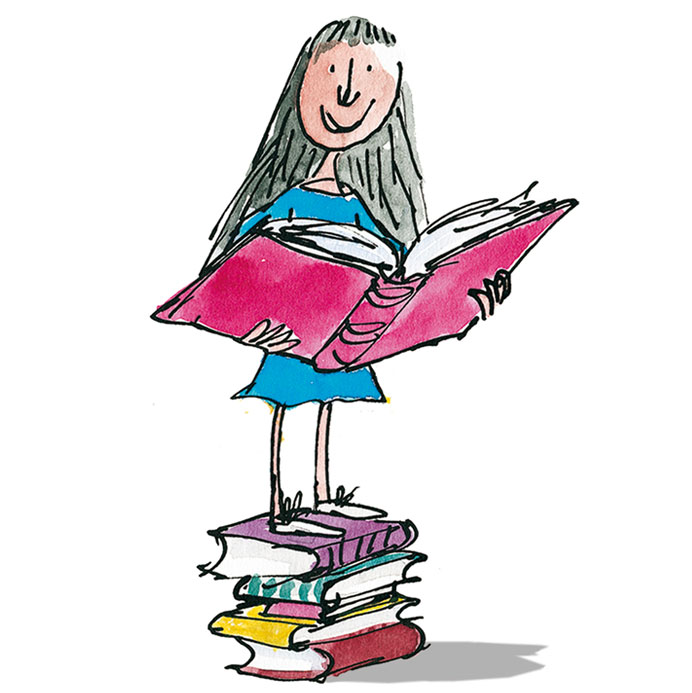 The Telegraph UK reports that lyrics in Matilda The Musical will be Americanized, although the British accents affected by the American cast are staying.  "There are a few lyrics that they’re just not hearing because they’re so dense and require thinning out," explained Tim Minchin, who wrote the score. It’s not clear which lyrics were rewritten exactly.

But, you know, stupid Americans. Elsewhere in the Telegraph piece, the journalist notes "British voices have proved notoriously problematic for American audiences in the past, with some films given subtitles." I beg your pardon, sir. We need subtitles to understand Mama June on Here Comes Honey Boo Boo, too.

Get him a drink, then give him the boot.

1. The Map Room (Bucktown/Wicker Park) – With books and maps reminiscent of a European explorer’s study and a second-to-none beer selection, the bar’s literally perfect for telling the guy to take a hike.

2. The Vic Theatre Brew & View (Wrigleyville) – When the dilapidated old Vic Theatre isn’t hosting concerts (which is most nights), you can watch third-run movies, drink, and yell obscenities at the screen at its Brew & View night. Either way, you can scream, pull at your hair, and spill your guts without making a scene.

3. The Long Room (Lakeview) – Yeah, it’s just one long, dark room with a patio seating area to the side, but the place has a certain indiscernible charm. Lure him into the photobooth and document the exact moment his heart breaks.

4. Eno (Near North Side) – Go under the ruse of wanting to taste some of the best South African or French wines being poured in Chicago, and pick a communal table half-full of single women. Introduce yourself and your soon-to-be-ex, then never come back from the washroom.

5. Fulton Lounge (West Loop) – Get here before 9 p.m. if you want to snag a seat on the couch or chair in one of the front-room lounge areas. When it gets too crowded — and it will — let go of his hand, give him back the necklace, and break it off just as the mob shoulders you in different directions.

6. Hogs & Honeys (Lincoln Park) – It’s a Coyote Ugly-esque bar where the ladies dance on the bar and pour shots into your mouth. Stick around to watch the gals ride the mechanical bull and use his stares as an excuse to say that’s the final straw.

7. Salud Tequila Lounge (Bucktown/Wicker Park) – Order a couple of tequila cheeseburgers and half-dozen margaritas. When you’re both good and toasty, then you can fearlessly dig your forefinger into his chest and rattle off your list of complaints.

8. Matilda (Wrigleyville) – If you’re one of those dramatic couples who like to follow each other around while arguing, you have three bars to stomp into at Matilda’s. In the basement bar — Baby Atlas — you can blow out one of their candles as a metaphor.

9. Potter’s Lounge (Wrigleyville) – Brush shoulders with jazz lovers and carelessly rich spenders in this swanky-for-Hilton-Hotel lounge. Let him buy you one (or three) of their stellar Mai Tais, score a dark leather booth and explain that it’s not him, it’s you.

10. Waterhouse Tavern and Grill (Roscoe Village) – Quality bar food and stylish bartenders serve pitchers of down-the-hatch favorites like sangria and rum punch. It’s located directly under the Paulina Brown Line station, so when you give him the bad news you can run upstairs and catch the train to singleville.