The blessed news is out, my friends: Kim Kardashian and Kanye West are expecting a baby girl. 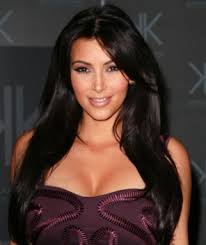 This "news" was reported exclusively by US Weekly and comes from "a source close to  the pregnant reality star," AKA Kris Jenner hiding in the powder room with her Blackberry. Baby Kardashian-West is due in May, at roughly the same time as Prince William and Kate Middleton’s baby, in an obvious undermine-y bid to grasp the title of Most Important Baby Ever.

Kim recently told Du Jour magazine that she’s been trying to eat healthy but has also been watching programs like I’m Pregnant And Addicted To Meth, which is an actual show:  "It definitely makes me feel better if I’m wanting one sip of Diet Coke or, you know, too much sugar. I’m like, This woman is on meth."

This does mean for the next 18 years, at least, our eyeballs will be assaulted with Baby Kardashian-West’s outfits. But at least Blue Ivy will have a fancy playmate, right?

Kim Kardashian’s prop kitten Mercy, which she carried around in public on New York City streets, has suddenly died. It’s an ignomious end to the feline whose only reason for being was to detract attention away from Karl Lagerfeld’s kitten, Choupette.

Mercy was a gift from Kim’s boyfriend Kanye West and naturally these two named the kitten after one of his songs. After a few paparazzi shots with the kitteh (in front of a taxi cab! leaving Starbucks with Khloe!), Kim "realized she was allergic" and gave the kitten to her sister’s assistant.

But the fluffly white prop was not long for this world. According to US Weekly, Mercy was euthanized after she was found to have a "cancer-like virus often associated with breeding."

We can take two lessons away from this sale tale:

One, this is why we don’t adopt purebreds, Kanye.

And two, this is why we don’t fuck with Choupette.

Kind of like how you stopped listening to OK Go when your mom told you all about this great video of guys dancing on treadmills she saw on the Internet, Mitt Romney’s bald-faced lie that he likes Snooki is truly a sign Jersey Shore‘s time has passed.

Mittens and his wife Ann Romney will divulge their pop culture guilty pleasures on a pre-taped interview on Live! With Kelly And Michael airing Tuesday. "I’m kind of a Snooki fan," Mitt says, as quoted by the New York Post. He also, weirdly and creepily, lauds the 100-lb meatball for losing her baby weight so quickly. "Look how tiny she’s gotten. She’s lost weight. She’s energetic. Just her spark-plug personality is kind of fun." Mittens then pretended to know what a Honey Boo Boo is and his wife Ann dissed the Kardashians: "Who can keep up with the Kardashians?"

Not that we needed any more proof that the Romney’s are out of touch with the average American, this dated-reference attempt at a humanizing moment proves they’re out of touch pop culturally as well.

It’s almost 2012, but we have a late entry for “most wonderfully weird story of the year.” TMZ reports Clint Eastwood’s family is shooting a reality show intended to air on the E! network. Filming is already underway, and the show “will focus on the relationship between Clint’s wife Dina Eastwood, their daughter Morgan and Clint’s 18-year-old daughter Francesca.” TMZ’s sources say it should start airing in a couple of months.

Clint won’t be the protagonist of the show, but he will have a role. Pour yourself a nice glass of wine, take a seat, and read the following sentence from Movieline; it’s one the greatest assemblages of words ever written:

“Clint has allegedly agreed to appear occasionally but will remain a peripheral character to his female Eastwood counterparts, much like Bruce Jenner on Keeping Up with the Kardashians.”

Finally, we’ll have Clint Eastwood in the role he was born to play: Bruce Jenner, only squintier.

Fittingly, Bunim/Murray, the same company responsible for Keeping Up with the Kardashians, is producing the Eastwoods’ show.

I know what you’re thinking. "Did he shoot a six-episode arc about getting a new puppy, or was it only a five-episode arc?" Well, to tell you the truth, in all this excitement I kind of lost track myself. You’ve got to ask yourself one question: "Do I feel lucky?" Well, do ya, punk?

● The Secret Millionaire’s Club, Warren Buffets’ online animated web series that teaches kids finance basics, will make a grand television debut this weekend. Special guest voice-appearance by Jay-Z. [NYO] ● President Barack Obama isn’t happy about all the Keeping Up With The Kardashians his daughters like to watch, but Michelle doesn’t mind so long as it’s a learning experience. “If they’re learning the right lessons, like, that was crazy, then I’m like, okay,” she says. [iVillage] ● Courtney Love owes Jacob the Jeweler $113,000 for a pair of diamond hoop earrings and a diamond chain she borrowed and never returned. We’re gonna go ahead and say this was Jacob’s bad. [NYP]

● David LaChapelle and “RiRi,” as he likes to call her, have come to reportedly happy terms on her “S&M” video, which he believes borrows heavily from his own work, settling the case out of court for an undisclosed sum. [Page Six] ● Thanksgiving is only a month away, so it’s almost time for Justin Bieber’s Christmas album to take play on repeat until, oh, say, Valentines day. To get you started, the first video from the carol album, as premiered last night on MTV: “Mistletoe.” [Huff Post] ● Lindsay Lohan has been re-assigned to the morgue for the remainder of her community service hours. [TMZ]