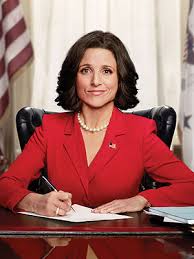 Veep has always been a way more interesting show to me than Girls, but has been stuck in Jan Brady status — meaning the Julia Louis-Dreyfus-headed comedy about how much it sucks to be vice president has never gotten quite the attention it deserved. Kinda meta, isn’t it?

But thankfully ratings seemed to have been good enough that HBO has renewed the show for a second season. Veep returns, with cast members Tony Hale from Arrested Development and Anna Chlumsky, on Sunday, April 14.

You can watch the season two trailer below:

“I’ve grown to love acting so much,” says Reid Scott, “because I get to flex completely different creative muscles in front of the camera than I do behind it.” Scott, who is best known for his role as Dr. Todd Mauer opposite Laura Linney on Showtime’s cancer comedy, The Big C, initially had dreams of life in the director’s chair. But the film school graduate will have to put those plans on hold after hitting the actor’s jackpot with a part on HBO’s new workplace comedy, Veep. In the sharp, fast-talking show, adapted by acclaimed British satirist Armando Iannucci from his own BBC series, Julia Louis-Dreyfus portrays the American Vice President as a frustrated and marginalized second-in-Commander in Chief. Scott is the smarmy Dan Egan, a “snake in the grass” who sells out his senator boss for a chance to join the VP’s staff. “Who doesn’t like to play a bad guy?” Scott asks. “You get to exorcise all of your own demons.”

Unlike a perfectly contained Aaron Sorkin script, Veep has a more naturalistic style. “It isn’t glossy like The West Wing; even though that’s fine acting and fine writing, it doesn’t seem real. I’m pretty sure things don’t happen that way.” During shooting, the cast, which includes Anna Chlumsky and Tony Hale, was sequestered in Baltimore, “marinating” in their characters but still finding time to enjoy the city’s nocturnal comforts. “I had this preconceived notion that Baltimore was not going to have good food, and was completely surprised because every place we went had terrific food,” says Scott. “We always ended up at Salt, a little place with great beers. We’re all beer drinkers, and the food was awesome.

Much like his work on the BBC’s The Thick of It, Armando Iannucci is bringing a less charitable view of national politics to HBO’s Veep. In the show, Julis Louis-Dreyfus plays the hapless vice president of the United States, one who’s forced to attend meaningless fundraisers and make up platitudes on the spot (less Cheney, more Biden). She’d rather have more power, of course, which is why there’s a little smile on her face when she’s informed that the president is experiencing chest pains. So yes, it’s going to be that type of farce, one that will probably make you feel a little worse about the state of American politics like most things do these days.

Louis-Dreyfus is backed by a Murderer’s Row of comedic bit players: Arrested Development‘s Tony Hale, Upright Citizens Brigade founding member Matt Walsh, and everyone’s favorite "that girl," Anna Chlumsky. The curses are bleeped out in the trailer, but knowing the inspired language that filled up The Thick of It and its film spinoff In The Loop I’m guessing the show will be quoted around the Internet after it premieres on April 22, assuming it can deliver on the silliness we’ve seen so far.

When Anna Chlumsky starred as Macaulay Culkin’s automatic crush Vada Sultenfuss in the 1991 classic My Girl, a child star was born. But then came a string of mild films that led Chlumsky away from Hollywood and into college life as an international studies major at the University of Chicago. But now that she’s all growed up, Chlumsky is making what seems like an inevitable bid for a serious career as an actress, and she’s launching it with In the Loop. In the political satire, Chlumsky plays the sexy and ambitious Liza Weld — aide to the US Assistant Secretary for Diplomacy (Mimi Kennedy) — whose anti-war briefing paper causes a cross-Atlantic stir. We caught up to the actress to talk about her return to the big screen and what she likes about living in Brooklyn.

In The Loop is your first starring role in a film since the mid-90s. What inspired you to return to show business and what was it that attracted you to this film in particular? Five years ago I decided to get back into show business. I was getting a lot of signs that made me ask what I should doing. And after taking inventory, I just thought, would I be able to face my grandkids someday and tell them to follow their dreams when I didn’t? So I thought, I have to take a risk, and I have to go for it and do it on my own time and know why I’m doing it. And with In the Loop, I auditioned for it and was excited just to be auditioning for anything that the BBC was putting out because I’m a big old fan of the BBC television productions.

The film is a pretty glaring satire of how the media spins and twists political events. Did working on this film make you even more aware of or cynical towards the politics and the media? I think in a way it confirmed what I had always suspected, which is that all these people that we talk about in our day-to-day who are running the government, they really are people. And I think that we have such a habit as a society to “good and evil” everything, to make it a comic book. It really hits so much closer to home if we see it as: these are people who wake up, drink their coffee, and go to work. From a media standpoint, I loved what Armando’s been saying, which is “Who does have the power anymore?” If they’re so afraid about something they say being spun the right or wrong way, they really can’t have any power over their own decisions. It’s such a funny and truthful way of looking at politics.

You got your degree in international studies at the University of Chicago. Were you planning to find a career in that field if you didn’t return to acting? When I chose a major I was just doing the liberal arts thing where you choose what you love to study and take all the classes that you can in that particular genre. I did internships in DC and nothing panned out. It turned out — thank goodness — I didn’t do that, because I don’t think I would have been good in those positions. Once you know more about yourself, you start to realize where you’d be good and where you wouldn’t.

You’re best known for starring in My Girl when you were 11 years old. How do you think that being a child star and achieving that level of success at such a young age has affected the trajectory of your career? It’s really surreal because when you’re a kid, you’re not really acting in the way that we think of it as adults. Acting is really about finding the truth in some way or form and communicating that, and the whole beauty of kids is that they speak truth by nature. When you’re little, you say the lines right, and all the adults around you are like “Oh, she’s so great, she’s a natural.” That’s why I think it’s so important to get training once you get older, because you start to develop walls. I’m very grateful when people say how good I was or how well I did, but it’s funny because I didn’t really have much to do with it. I’m more grateful that I got to be involved in such a good movie that meant so much to people. That’s where all the compliments and the recognition and stuff like that lives for me, as opposed to necessarily the way I’m doing it now, which is really honing my own skills. When I was little it was more just saying what the adults told me to say.

You’re currently living in Brooklyn. What made you choose to live there instead of Manhattan or LA? Back when I was moving here, it was a lot cheaper than Manhattan, which is not really the case anymore. But it was just a smarter choice, and I really appreciated so much the trees and the families and being able to feel like I was going home every night. My husband and I don’t have kids yet, so Manhattan might be in the future because we love Manhattan.

What are your favorite restaurants and bars in Brooklyn? In Brooklyn, I love Castro’s — it’s the best Mexican in my opinion — on Myrtle. That’s my favorite for tacos. It’s so, so good. We love Stonehome Wine Bar, that’s where we go all the time in Brooklyn. It’s a really good wine bar. In Manhattan, I love to go to Le Gamin on 9th Ave and West 21st. They have really great breakfast. It’s one of those places that you can just sit forever. And if you forgot your book, they have literary journals on the shelves so you can read poetry. It’s awesome.

● Drew Barrymore and Justin Long may or may not be together in real life, but in their new film Going the Distance, “they’ll be having sex every five pages.” [JustJared] ● Kim Kardashian and Reggie Bush have broken it off. It wasn’t a case of cheating; rather the two were rarely in the same place at the same time. [US] ● Sam Trammell, who plays Sam Merlotte on True Blood, says although he hasn’t seen Twilight, he thinks Kristen Stewart should come on the show and be a “little vampire or victim.” [DigitalSpy]

● Spoiler alert: The director of Wanted has revealed how he plans to bring back Angelina Jolie for the sequel. She may have a bullet in her head, but some time in all healing wax bath will remedy that. [AceShowbiz] ● Everybody’s favorite make-up-tears-wearing-indie artist Bat for Lashes may give up her newly minted singing career for motherhood. [SoFeminine] ● Anna Chlumsky (a.k.a. Vada Sultenfuss from My Girl) says being part of the Hollywood machine at such a young age “tainted” her . [CNN]