Ariana Richards, who played the precocious computer genius Lex Murphy in Jurassic Park EIGHTEEN YEARS AGO (reminder: we are all old), is currently an artist living in Portland. What has she been up to since she defended herself from a gigantic Tyrannosaurus rex with just a piece of plexiglass?

In an interview with the Wall Street Journal, Richards says that she took a break from acting (after Jurassic Park she was in the 1995 teen flick Angus) to study art at Skidmore College in Saratoga Springs, New York. While she still has an agent and remains "on the the pulse of what’s happening in Hollywood," her primary focus is working as a portrait artist who owns her own gallery.

Interestingly enough, however, she still keeps in touch with Steven Spielberg:

Of all the people she worked with on the film, Richards says the person she’s most in contact with is director Steven Spielberg. “He never fails to send me something around Christmas,” she says. “When he finds people he likes, he’s really good at keeping in touch.”

In return, she recently sent Spielberg a limited edition copy of her watercolor self-portrait of herself from a crucial “Jurassic Park” scene entitled “Raptor Vision.” The limited edition print now hangs in his office.

Raptor Vision, by the way, is the greatest piece of art I have ever seen. THOSE BANGS: 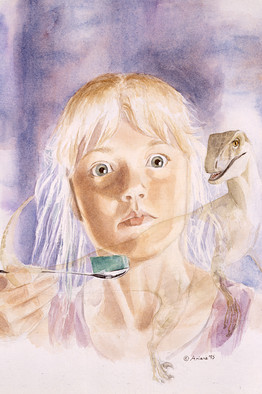