The sale of a Banksy mural called Slave Labor, which was removed from a London wall, got abruptly cancelled yesterday before it was to be put up for auction in Miami. 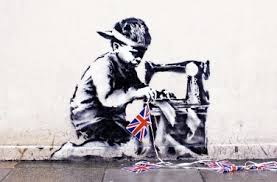 Slave Labor (also called Bunting Boy) depicts a little boy sewing together Union Jack flags; it’s said to be a statement on child labor and British exploitation of the disadvantaged and appeared last May in time for the Queen’s Jubilee. At some point, Slave Labor was removed from the wall of the building in Haringey where Banksy created it. Although it was not proven, there was some suspicion that the building’s owners removed it themselves, especially once locals learned it would be put up for auction by Fine Arts Auction Miami for $500,000 to $700,000.

But according to the UK’s Guardian, the sale was "dramatically halted" yesterday. Both pieces of work by Banksy in the auction — Slave Labor and another piece removed from a UK wall called Wet Dog — were withdrawn. The auction has refused to comment on the specifics of what happened.

Locals from Haringey have asked that Slave Labor not be sold and be returned to its original location. Fine Arts Auction Miami has said it is not their purview to return works, only to sell ones that owners want to be sold.